Showing posts from February, 2019
Show all

Twelve Journeys into the Medieval World 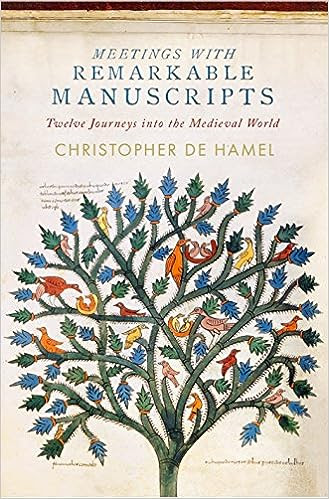 To be Medieval is to be bookish. As Lewis explains in The Discarded Image "If [the Medieval] culture is regarded as a response to environment, then the element in that environment to which it responded most vigorously were manuscripts” (5).  Admittedly, this is a book that I first pulled from the shelves of my local bookstore for it's aesthetic charm.* The cover was gorgeous! But, as the text is primarily about craftsmanship and preservation, it seems only natural that it should itself be presented in the same way. De Hamel has spent his life studying and cataloging manuscripts and he carefully records his own interactions with each manuscript, what is known (and what is speculated) about the history of each manuscript, and creation of each manuscript. A teacher just beginning to delve into Medieval History may feel that that it is too specialized to yet be of benefit, but, again, I invoke Lewis' observation. Understanding medieval culture is understanding their book
Post a Comment
Read more
More posts

Mrs. T
I am a second generation classical educator. I learned almost everything that I know about classical education from my mother. And, I would not be the woman that I am today without the care of my grandfather, my father, and my husband.